Henrik Larsen has just published issue #15 of his long running Danish language film and pop-culture magazine Obskuriøst. The new issue sports a spiffy old photo of yours truly. The picture was taken at a video night at Henrik's old pad in Copenhagen, Denmark ten years ago. Henrik showed me the photo a little while ago which was a bit of a surprise as I'd never seen it before and had completely forgotten pictures had been taken. But then again, ten years is a long time.


We ran a little video club at Henrik's place in the mid 2000s. None of us are sure how long it ran for but it was somewhere between three to five years.

- Order Obskuriøst through Henrik's blog. The new issue is 50 DKK plus PP. Keep in mind though, the mag is entirely in Danish. 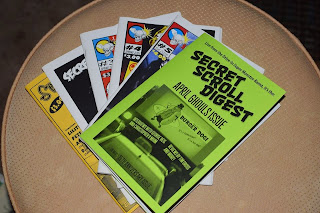 Editor Mike Haushalter asked if I would write a couple of reviews for his long running US based zine Secret Scroll Digest. Long running as in (almost) 15th anniversary issue! The new issue has just been released and it's currently in transit between there and here. I haven't written anything for any (published) publications for quite a while so this is really cool. The new issue is a drive-in special and the films which Mike asked me to review are both classics and faves of mine. I certainly look forward to receiving the mag heaps. Needless to say, a big thank you goes out to Mike.
Posted by Jack J at 19:31 No comments:

AWE's release of HELL OF THE LIVING DEAD with my booklet is out in stores and so far I've seen two reviews (in Danish):

For the full reviews go here: On-Z.dk and Skræk og Rædsel.
Posted by Jack J at 19:22 No comments: 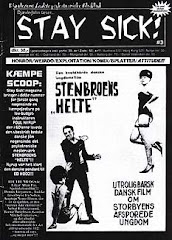 Welcome to It's Grim Up North publishing

Hi, I'm Jack J and I publish two underground magazines called Stay Sick! (in Danish) and Banned in Britain (in English) which both deal with trash, horror and splatter movies.

On this blog you can read about upcoming releases, check out which old issues are still in stock, and what else is happening in the Stay Sick!/Banned in Britain camp.

Got here via a link?

This blog is basically just info on the two magazine I publish. If you got here via a link and don't really know anything about me or "It's Grim Up North Publishing" you might instead want to check out my REAL blog where I ramble about films and pop culture in general (and give you my insane view on life). Just click here. 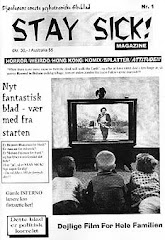 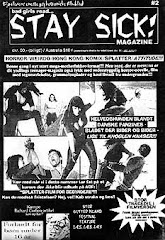